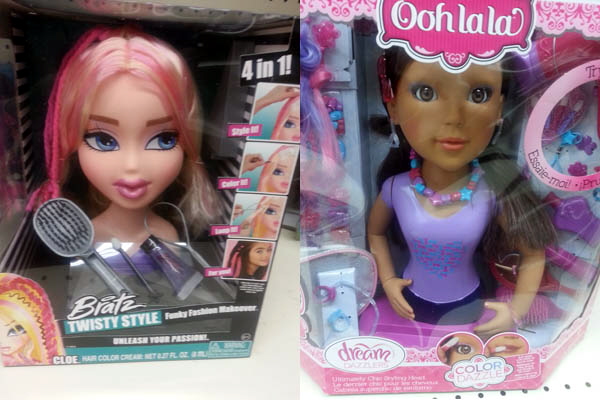 How hard is it to cross the racial divide…when it comes to baby dolls??!!

I know I sound like the worst type of closet racist in the world when I say “I’m not a racist, I have many white friends.”  And I do, I really do; and I LOVE some of my fair-skinned sistahs more than any of the chocolate divas in my life.   We gossip together, lunch together and even share hair curlers in the greenroom at work; everything that normal women do — so why was it so hard for me to purchase a Caucasian baby doll for my African American child?  I didn’t even know it was such an internal struggle until this Christmas.

Initially, it goes back to my childhood with the “white girls don’t play with black dolls, so you don’t play with theirs” philosophy that my mother instilled in me when I just a little girl.  I remember her only allowing me to break that tradition one time; when I was in the 5th grade and a die-hard Cabbage Patch Kids collector, they introduced the new “CornSilk Kid” line (which actually had hair to comb instead of yarn) and there wasn’t a black doll in the entire store.  My mother was too tired to run from store to store to find me a black one so she bent that time for me, and Judith Naomi was the first white doll of mine to come home and join the rest of the Cabbage Patch Kids:  Lena Sherlynne (Original), Amos Vick and Levina Mia (Twins), Blaine Ray (International Bull Fighter from Spain) and Dean Lamont (Baseball Kid).  Funny, I remember all of their names.  By the time I got my little family of adoptees going, puberty (sort of) hit and a (more advanced) friend of mine gave me the “side-eye” when she visited and saw the dolls all over my room.  Needless to say, the dolls were no longer my indulgences and I swapped them out for late-night secret phone calls with my gal pals gushing over some preteen boy who did not return my affection.  But I digress, back to the topic at hand.

Even though I outgrew “playing” with dolls, I remained a doll lover—specifically Cabbage Patch Kids– and always bought them as a gift for a family member or friend’s child for any occasion that presented itself, because I had no children of my own.   But as I got older, and the “Blacks against Whites” injustices were inbred in my psyche as a teen and young adult, I became “less understanding” when I could not find a black doll on a toy store shelf that was littered with white dolls with every hair shade and eye color known to mankind.  No longer would I just “settle” and bring Judith Naomi home with me, I would  immediately call for the manager and would have an “is this America” shit fit right in the middle of the store.  A KB Toy Store manager felt my wrath when he admitted to not ordering any black Cabbage Patch Kids because there wasn’t a demand for them, and a Toys R Us manager got a sharp “talking to” when it was learned that the “Susie Carmichael” Rugrats doll – the black girl – was only released in the small figurine (at that time) instead of the larger version like the other ones because of demand.  That word…DEMAND…huh?

Then it happened.  The Good Lord blessed me with a baby girl of my own, and I literally became the “black girls don’t play with white dolls” Mama.  But was I wrong?  I had the first Battle Royale with the poor representative at the Scholastic Book Club.  As much as I love dolls, I love books even more and wanting to pass that love on to my children, I joined the book club when I was pregnant with my first child.  Now after the Dr. Seuss, Adventures of Winnie the Poo, Berenstain Bears collection and full set of Encyclopedias, the book club made the cardinal sin—they started sending me the “Disney Princess” series.  Hold the phone, get out the afro pick and call Al Sharpton because Sir Walt Disney had NO REPRESENTATIVE OF MY BABY GIRL ON THE COVERS OF THESE BOOKS!  Well, there was Cinderella, everyone’s favorite Snow White, Belle, Tinkerbell, Pocohantas, Mulan and a damn mermaid—but no chocolate drop?  Let’s just say I demanded they cease and decist the series of insulting me unless I was canceling for good!  I remember having an all –out argument with the assistant manager of the Men’s Shoe Department at Nordstrom’s (where I worked at the time) because he said I was “ignorant” for being so upset.  I dismissed him, saying that he would never understand because he was a former athlete who undoubtedly dated white women before (as is customary for many of the locker room brothas) and he totally had no idea what it was like to be an “invisible” black woman in America.  Blah, blah, blah.  My boycott of Disney Princess only ended when Tiana came along and kissed a frog; finally a character that looked like my child!

But still, I began to take it too far.  I was even having trouble buying my little girl “Hannah Montana” clothing because it had a white girl on the logo.  My daughter was only 4 years old then, but she told me that it didn’t matter, so I began to bend on that – recognizing that Miley was not a doll, but rather a brand, and more importantly a human being. Slowly, the veil was beginning to lift….or was it?

Now, my daughter is 7 years old, and is becoming quite the little artist and fashionista.  She loves everything about hair and makeup and wanted two things; a Bratz doll because those are some funky little fashion chicks, and a doll whose hair she could comb. I had the perfect idea.  I remember as a kid having the Barbie “Head Doll” (my shade, of course) and the sole purpose of the doll was to practice hairstyles.  The kids were away spending Christmas with their dad while I worked and before they came home, I was on a mission to find it.  I went to Walmart early that morning – excited — and went down the aisle.  There she was the perfect combination – a Bratz head doll – two for the price of one – but stop the presses, she didn’t look like my baby girl!  But she was cute, she was funky, she was “razzmatazz,” she was everything that my daughter WAS, and of course only one thing that my daughter WAS NOT.  I had worked all week and was exhausted; therefore I had no strength to run from store to store.  I put my little fair-skinned, blonde and hot pink hair-streaked Bratz doll in the basket and sweated as I walked around the store, debating on whether or not she should come home with me.  It was one of the toughest moments of my life.  An older, black cashier listened to my concerns, then told me she thought we were past that threshold and to take the doll home to my little girl.  I agreed.  I took her home, wrapped her up and placed her next to the other Christmas presents.

Later on I went to a Rockets vs. Pelicans game, and on the way home (like a beacon in the night) I passed a Toys R Us that was just minutes away from closing time.  I whipped into the dark parking lot, ran to a counter and asked the girls if there were any black head dolls in the store.  They told me there was one that looked “sort of Latino” and could pass for black—maybe.  She wasn’t the brand I was looking for, but she was a mocha shade of brown, so I grabbed her and headed to the front.  But right next to her, there sat the Bratz doll I had taken home earlier, reminding me that my mission had already been accomplished and I needed to just give it a rest.  I ignored her, and looked on the side of the box in my hand and saw what appeared to be a biracial child playing with the doll.  Good enough for me, so I proceeded to checkout.

I wrapped her up too and placed her with the rest of the presents, including the white Bratz doll, and decided to let my little girl choose which one she liked the most.  One would have to go back to the store, I said.

When my daughter came home and opened her presents, I told her Santa must have made a mistake and gave her two of the same types of dolls and we would have to send one back so that another child could enjoy it.  I told her to look at them both carefully and choose the one she wanted.  She chose the one I wanted her to choose, but not for the reason that I did.  She loved the Bratz Doll, she said, but the other one had more bows and accessories for her to dress her up with!  Seriously, all of that I went through and when it all came down to it, it was about child’s play and innocence!  I felt like such a fool.

I think so many people have shut us out of things from Hollywood roles, to magazine covers, jobs and even love.  Don’t even get me started on black athletes who ONLY date white women—so things like that have left a bitter taste in my mouth.  But a simple decision, based on the simplest of reasons from my baby girl helped me see everything in a new light.  I guess life or who you choose in your life is not about the black or the white, it is simply what brings you joy.  It’s all child’s play.  And we should all get over ourselves; especially me!

What I want to instill in my daughter is not racist…it is racial…it is about pride, self- esteem and loving THY SELF.  And trust me, she does. She is at a culturally-diverse elementary school, in a culturally-diverse ballet class and is on a culturally-diverse cheer team, and she could care less about shades of skin color. And I should be proud of that.  What’s funny is I had this discussion with my mother and she said “I said that? Child really, I guess because that’s how it was back in the day.”  Decades later, we are still have so much hurt inside, but hopefully our kids will teach us how to move forward like my daughter is helping me.

Out of the mouths of babes…Lesson Taught…Lesson Learned.  Besides, I’d do almost anything just to make my little girl smile!  She’s worth it!

Hatred and intolerance are learned behaviors, so are love and acceptance. My daughter taught me to let go of the small hang-ups. I guess I am teaching her right.