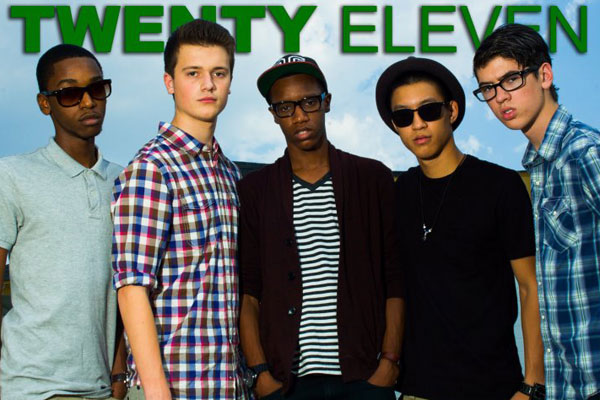 This article was written by Allen Le, a promising young journalist studying at the University of Houston.  Le says he knows where to find the hottest talent in Houston, and I believe it’s safe to say, I agree.  He sat down with Twenty Eleven, an up-and-coming group of young artists who are just as talented as they are diverse.  They are definitely among Houston’s Hottest!

HOUSTON—Twenty Eleven may be the next big mainstream musical group to come out of Houston, and on a typically hot and sizzling summer day, they are sitting together in a local burger establishment casually waiting for their food. Luckily, the burger spot acknowledges the severity of the Houston heat and the air conditioner is on full blast.

Tre-Will, whose real is name William Tre Yancy III, could have easily maintained his cool without the help of the blasting air inside the restaurant. The 18-year-old rapper definitely has an aura and a swag all his own.  He is built like a rookie NBA player, lean and tall with extensive arms and legs. One cannot help but notice the glistening set of white teeth that breaks out through his smile. It is something that can definitely grab the attention of many female fans.

Gilmore, who is the other lead rapper of the band, is the now all-too-common “white boy” who fell in love with a genre of music dominated by black artists. Unlike Tre, who grew up in a household surrounded by hip-hop, R&B and soul, Gilmore had to discover the culture mostly on his own. After his curiosity of music got the best of him, he was inspired to become more than just a fan of hip-hop and finally started rapping himself.

“My mom bought an Eminem CD and a Nelly CD and I listened to those CDs when I was young,” says Gilmore. “It’ll be N’Sync, then it’ll be Ludacris, then it’ll be Britney Spears, then it’ll be Limp Bizkit; and so I got these crazy genres and a lot of rapping was in those songs, so I just figured out how to do it.”

Gilmore and Tre have known each other since they were in the sixth grade, but it wasn’t until they entered their freshmen year at Lamar High School in 2007 when they finally started to connect as real friends.

“We didn’t really talk to each other, I just met him then,” Gilmore says.

On the other hand, Gilmore’s friendship with Avery Davis, the band’s drummer, lead guitar player and producer dates back to their elementary school days. They originally met each other in the first grade and have managed to stay connected throughout the years.

“It [Twenty Eleven] started out like way back when, but it didn’t officially start until kind of like freshmen year in high school,” says Gilmore. “I met Tre in class and I was like, ‘Hey dude, me and Avery have this like band we’re trying to do. You want to come in and do some songs with us?’ And he came in and we did a song and he took that as an invitation into the band so he kind of just joined.”

“So academics kind of got us to where we are today,” adds Tre. “Go to school, make a band.”

Tyler Tran and Dallas Jones – the two other members of the band– complete Twenty Eleven. Both members were welcomed into the group sometime during the 2009 – 2010 school year when Davis, Gilmore, Tran and Tre were all juniors in high school. Tran, who also goes by the stage name DJ Motai, was added after the three original boys realized that they were going to need an official DJ if they were going to have successful live shows.

Jones, unlike the rest of his band mates, was only a sophomore then when Gilmore and Tre heard him sing a rendition of popular gospel hymn “His Eyes Is on the Sparrow” in their choir class. That was when Jones’ spot into the band was solidified. “Once he finished, like 12 girls were crying. No, it was probably more than that so from there we were like, ‘We got to have this kid in our group,’” recalls Tre.

Jones’ voice is full of heart and soul and the band ultimately revolves around it; he commands the attention of the room.

Twenty Eleven fittingly represents the diversity of the city where all five of the boys met and live in.

“Our first few shows were predominately black. That was pretty much everyone who was in there,” says Gilmore. “So definitely whenever we roll up and there’s like two black guys, two white guys, and an Asian guy; they don’t really know – they are stereotypical, they’re already like, ‘Okay, these guys are going to be whack.’ And we’re like all in high school – at the time we were all in high school – so we were always counted out. I can’t tell you how many times I went to a venue and I was asked if I was the guitar player. Like every time – every time.”

Perhaps one of the most interesting things about a band is the origin of their name and it is no different in Twenty Eleven’s case. They fit the standard of most band names – intriguing, odd and weird. At the same time, the name has a nice appeal to it and is very pop culture oriented.

“We had a different name before – it was bad – ‘cause we found out that it was gang-related, but didn’t know that,” says Gilmore. “We decided that we needed a new name and we all had our own ideas. It was me, Tre and Avery and then my mom suggested, ‘Why don’t you call it Twenty Eleven? Because that’s the year coming up, 2011 is when you graduate and there’s a bunch of reasons she listed so I wrote it on the list and it wasn’t our favorite name, but it was the only one that we all agreed on and it stuck.”

Twenty Eleven is more hip-hop than the Gym Class Heroes, but less street than N.W.A. They have more members than Outkast, but are not as overwhelming as the Wu-Tang Clan. They represent Texas just as much as UGK does, but are also influenced by their east coast hip-hop counterparts. If they are not careful, they might just become another hip-hop-turned-pop band like the Black Eyed Peas.

The boys are against labels, like every other rebellious young American.

“From the get-go, I didn’t want be looked at as a hip-hop band because when people hear hip-hop, obviously they’re thinking gangster rap, baggy jeans, grills, ice chains and stuff,” says Gilmore. “I didn’t want to be boxed into that, obviously, because that’s not who I am. That’s not where I come from; I come from an all-white family who listens to country music.”

Twenty Eleven’s goal is to ultimately have a broad appeal to everyone and produces music that’s relatable.

In December of last year, the boys released their first LP titled Renewable Energy. The project offered listeners 12 songs, including “Time Goes On,” which can easily serve as the signature sound of Twenty Eleven. The record is reflective, soulful and, above all, enjoyable.

The five boys exhausted their music catalogue performing everywhere from concerts at their own high school, venues throughout downtown Houston and even in Austin earlier this summer. They were finally getting the right kind of exposure, hype and response that they needed. After only five months since the release of Renewable Energy, the boys used their wave of momentum to get back into Davis’ living room to record new material.

Four of the five boys finally graduated from high school this past summer.

Their new self-titled album captures the same emotional, organic and raw sound that Twenty Eleven has come to be known for. Jones’ presence on the new album is perhaps the centerpiece of it all. Tracks such as “Feelin’ Good,” “Lost My Smile” and “Be Heard” allow him to bask in the spotlight and take center stage.

“I think now listening to the new Twenty Eleven LP, it’s kind of like – Renewable Energy was kind of a sample, a late appetizer almost and it lead up to this new album,” says Gilmore.

After three months of recording, Twenty Eleven was digitally released in August right before Davis, Gilmore, Tran and Tre started college at the University of Houston.