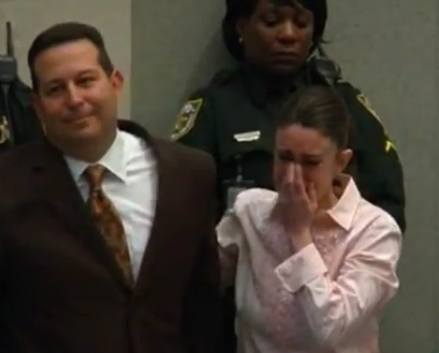 Does Casey Anthony’s ‘not guilty’ join ranks of O.J., Blake?

Did she or didn’t she?  Well chances are, we will probably never know.  Casey Anthony has joined the ranks of O.J. Simpson and Robert Blake after a jury of her peers came back with a ‘not guilty’ verdict in the murder of her 2-year-old daughter, Caylee.

The case, which has held America captive for nearly three years, has all the elements of a made-for-TV drama.  And we are sure producers and directors are already casting her lookalike for a Lifetime movie or a Law and Order/CSI skit, in addition to rushing to update the E! and Dateline documentaries with footage from Tuesday’s shocking events.

After sitting for hours upon hours listening to testimony for a month and a half, the jury of seven women and five men took less than 11 hours to return with a verdict.  They found 25-year-old Anthony not guilty of first-degree murder, aggravated manslaughter and aggravated child abuse.

They did, however, convict Anthony of four misdemeanor counts of lying to investigators who were looking into the June 2008 disappearance, then death, of little Caylee.

Prosecutors insisted Anthony—a single mother living with her parents—suffocated Caylee with duct tape because she wanted to be free to hit the nightclubs and spend time with her boyfriend.

Prosecutors painted her as a habitual liar and detailed the various lies Anthony was able to keep up to family and friends over the years.  She told her parents that she couldn’t produce Caylee because the girl was with a nanny named Zanny—a woman who doesn’t exist; that she and her daughter were spending time with a rich boyfriend who doesn’t exist; and that Zanny had been hospitalized after an out-of-town traffic crash and that they were spending time with her.  She also had her parents believing for years she was an employee at Universal Studios.   She did not confess to investigators about the lie until she was actually in the building and leading them to her alleged work station.

Photos of her living it up while Caylee was reportedly missing were splattered across the Internet and her wild antics were well-documented.  Anthony even got “Bella Vita,” which means good or beautiful life, tattooed on her body during that time.

Defense Attorney Jose Baez argued the toddler drowned and that when Anthony panicked, her father, a former police officer, decided to make the death look like a murder by putting duct tape on the girl’s mouth and dumping the body in the woods a quarter-mile away. Anthony’s father denied both the cover-up and abuse claims made by his daughter.

Despite Anthony’s contradictory stories and google searches on the home computer for words like neck breaking and chloroform,  jurors ultimately decided that Anthony did not intentionally kill her child, as stated by prosecutors.   Critics say prosecutors overcharged Anthony, going in for the hard kill, instead of proving their case “beyond a reasonable doubt” with their limited evidence.

Anthony dodged a bullet – actually the death chamber – as she was cleared in the counts regarding her child’s murder, but could still be sentenced to a year behind bars for each one of the convictions for lying.  But since Anthony has already spent almost three years in jail during the investigation and trial, Anthony could walk free with time served. Judge Belvin Perry will sentence Anthony Thursday morning on those charges.

A collective gasp was heard around the world as the “not guilty” verdict was read, bringing about feelings of rage, shock or utter disbelief from many.

But really, is it all that shocking?

Many sensationalized trials have had the same outcome.  At the time of her daughter’s disappearance, Anthony was pictured partying like a rock star, and in the end, she appears to have been given the fate of other stars in media-blitzed trials.

Remember O.J. and the Dream Team? Well, thanks to Johnny Cochran’s courtroom rhyme-time savvy and “The Juice’s” glove theatrics (If it doesn’t fit, you must acquit), O.J. walked out a free man in the 1995 double-murder of his ex-wife Nicole Brown Simpson and waiter Ron Goldman.

Police said a trail of blood led them to O.J. and the same blood was found smudged on O.J.’s white Ford Bronco, in which he famously led police on a freeway chase while threatening to commit suicide, but in the end the trial turned more into a circus of theories than what could actually be proven.

Even though O.J. won the criminal trial, he lost in civil court and was ordered to pay multi-million dollar settlements to the victims’ families.  O.J. barely paid a dime to the families and continued to live the high life until he was sentenced to 33 years in jail for a separate armed robbery and kidnapping case.

Another celebrity, Robert Blake was acquitted in2005 for the murder of his wife, and mother of his child, Bonnie Lee Bakely. Blake and Bakely had just finished having dinner at a swanky restaurant when Blake said he left something inside the restaurant.  He then said he returned to the car to find Bakely dead from a gunshot to the head.

Blake walked free even though two men gave sworn testimony that Blake tried to hire them to kill his wife.

Just like O.J., Blake was found liable in Bakely’s death and ordered to pay her children $30 million.

But in the case of little Caylee Anthony who pays?  A prosecutor will be blamed for “blowing” it, jurors will be scrutinized for their decision, a family will forever be torn apart by lies and finger-pointing and a secret will forever remain in a Florida swamp of who tossed a bright-eyed baby girl in the bushes.

Reaction to Anthony verdict from around the world:

Ti McLeod, a neighbor of the Anthony family
”The justice system has failed Caylee.”

Jodie Ickes, who shares the same hairdresser as Anthony
”I’m comfortable with the outcome.”

Doug Berman, a criminal law professor at Ohio State University
”In some sense, it’s a sign that the system worked well,” Berman said. “The job of the system is not to turn this into a Hollywood ending, but to have all the actors in the system do the job to the best of their ability.”

Gregory Jantz, psychologist
”Popular opinion did find her guilty, which is why we have so many people right now in shock,” said Jantz, author of “Overcoming Anxiety, Worry and Fear” and founder of counseling and treatment center A Place of Hope. “The next phase is going to be anger, and particularly from people who have suffered from trauma in their own lives.”

Justin Stangel
David Letterman’s Late Night writer tweeted : “Casey Anthony found not guilty of murder! She screamed “Wow, even I thought I did it!”

Kerry Sanders
Sanders said he received messages from people in Nigeria, Germany and worldwide telling the NBC News correspondent how they had been captivated by the Florida case.

The Associated Press contributed to this report.