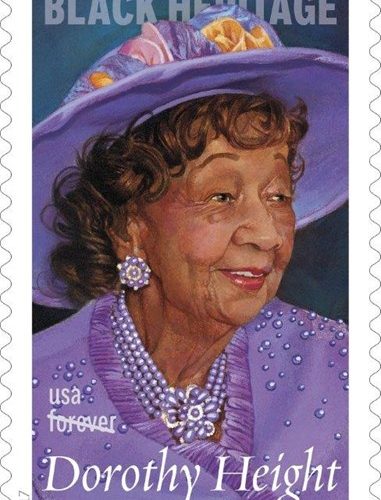 In honor of a phenomenal woman: Civil Rights icon Dorothy Height gets her very own stamp!

The God mother of the Civil Rights movement just received her stamp of approval on Wednesday! Activist Dorothy Height was honored by the U.S. Postal Services at Howard University as they revealed the new “Dorothy Height Forever” stamp for her service, commitment, and dedication towards social justice and equality for all.

A hero to many, Height is known for many things, but one thing for sure is that she was one of the most influential women in the 20th century through her unfailing, lifetime commitment of service and advocacy.

Height was a member of trailblazing organizations like the National Council of Negro Women, Council for United Civil Rights Leadership,Young Women’s Christian Association, and also helped form the organization African-American Women for Reproductive Freedom. The Civil Rights Matriarch was also the 10th National President of Delta Sigma Theta Sorority, Inc. Although working behind the scenes most of the time, Height aided Dr. Martin Luther King, Jr. in the fight for justice, even standing on the stage with him as he delivered his legendary “I Have a Dream” speech.

Height spent a lifetime helping black women with issues that included illiteracy and voter awareness, and was even awarded the the Presidential Medal of Freedom by former President Bill Clinton. Her work could truly never go unnoticed.

Anyone can purchase the “Dorothy Height Forever” stamp at usps.com/stamps, at the Postal Store usps.com/shop, by calling 800-STAMP24 (800-782-6724) and at post offices nationwide!