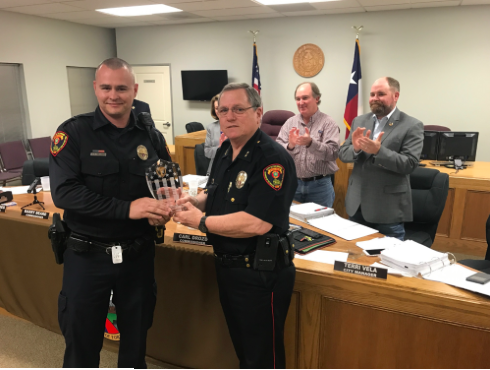 A Richmond Police Officer was presented with a Lifesaving Award at the City of Richmond Commission meeting held on Feb. 20.  Richmond Police Officer James Williams responded to a call on Jan. 16, 2017 where a man was laying in his driveway unresponsive. Officer Williams arrived to the scene and immediately began administering CPR on the victim.  It appeared as though the victim had suffered a heart attack.  Although the victim succumbed to his illness the following day, Officer Williams’ actions enabled the family of the victim to have time with the victim before his death.

Richmond Chief of Police Gary Adams presented Officer Williams with a Lifesaving Award, and a Lifesaving Ribbon which can be worn on the officer’s uniform.  “Officer Williams would tell you that he was just doing his job, just as most police officers would, however, when officers go above and beyond their normal duties to save the life of a fellow human being, those actions deserve to be recognized,” Lt. Lowell Neinast said.