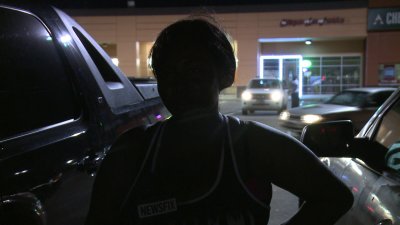 Exclusive: Prostitute from “The Track” speaks about “booming” business, residents want them out

EDITOR’S NOTE: Revisiting the best…. As the web department manager at CW39 Houston, I had the privilege of finding the most compelling stories, good and bad, in H-Town to feature on our show, I am sharing those people with my readers on NewsWithAttidue.com. Enjoy!

HOUSTON — It was a dark Monday night, but the streets were lit up, and not in a good way. It was actually a sad sight to see for many, and a problem that just won’t seem to go away for residents and business owners in parts of southwest Houston.

In 2016, prostitution is still a major issue along Bissonnet and the Southwest Freeway. Despite being highly-publicized in recent years, the women are still out in full force, and people in the area who witness what’s happening daily say the police are either doing nothing, or not enough.

A viewer reached out to NewsFix complaining about the problem.

“No one cares or wants to do anything about it. The prostitutes regularly prance around pantless or in lingerie and the police just drive by. If they can’t find them prostituting, then they can get them for indecent exposure. Although you’d have to be blind not to see them since they are there from Friday morning to Sunday night. Rain or shine. Almost naked,” the viewer wrote. “I even sent in video to a news channel and they didn’t care. I know it’s not a rich neighborhood, but you can’t even drive by during the day with your kids without worrying about what they will see. Please do something, no one cares.”

NewsFix cares, and we went to check it out for ourselves, and witnessed women who appeared to be “ladies of the night” walking around, possibly soliciting customers.

One woman, “Nita,” admitted to being a prostitute and shared her story with us, explaining why she was out working the streets. She said business was booming that evening.

Nita was actually somewhat delightful to talk to, despite the circumstances. She was upbeat and had a kind spirit. What’s disturbing is that this well-spoken young woman seemed capable of doing so many other things, yet she chose the night life as a way of survival, like so many others she is working alongside.

“You meet some really good girls out here, some girls don’t even belong out here, just the way they act. The money’s good, you’ve got a lot of customers out here,” she said. “What brings me out here every day is the money. You make good money on the strip.”

And how much money is there to possibly make?

“On a weeknight, you can gross about $800, somewhere off in there, and on the weekends, you can get above $1000 Friday through Saturday, but Sundays are kind of slow,” Nita said, further explaining, “It’s  faster on Mondays, Wednesday and Fridays, and then it gets real super crazy on Saturdays.”

According to concernedwomen.org, the average age of entry into prostitution is between 11 and 14 years old, and the vast majority of women in prostitution do not want to be there. Few seek it out or choose it, and most are desperate to leave it.

Nita says she was not forced into the situation by anyone, she was actually just doing what her peers were doing.

“I have friends out here so I just jumped off the bridge with them. I was being a follower, but then I got adapted to this life, though,” she said.

“Jumped off a bridge” is a profound statement, summing up the dangers these women are surrounded by. Despite it all, Nita believes she can handle herself.

“It’s very dangerous because you don’t know who you are getting in the car with or anything. You’ve got girls who have been pushed out of cars and girls that are being raped and everything, so you’ve just got to be careful on that. That’s why a lot of girls carry around pepper spray,” she said, adding that she does not carry a weapon, “because I’ve got my two hands.”

A U.S. Department of State Trafficking in Persons Report noted, “few activities are as brutal and damaging to people as prostitution. Field research in nine countries concluded that 60 to 75 percent of women in prostitution were raped, 70 to 95 percent were physically assaulted, and 68 percent met the criteria for post-traumatic stress disorder in the same range as treatment-seeking combat veterans and victims of state-organized torture.”

Nita credits her street savvy for keeping herself safe, thus far, and said she is “very picky” of the customers she chooses.

“It’s straight, as long as you get out here and make your money and not on no friendly stuff, not in every person face that you know you can’t trust, it’s good out here,” she said.

We tracked down Kenya Randall, a former prostitute named “Peaches” who became the center of a viral video posted on the Insite, and interviewed by a local reporter.

“St. Louis, Chicago, Memphis,” Randall said. “The word around the country is that Bissonnet is a million dollar strip. Everybody everywhere is trying to get to Houston — to get on Bissonnet.”

Houston police have faced criticism from residents who want to see an end to “The Track,” but Randall said arresting these women is only a band-aid solution.

“You can arrest five, but 20 will show back up,” she said. “If you take them off of Bissonnet, they’ll end up on Beechnut.”

Randall said jailing isn’t meant to victimize the women more — it’s to get them involved in something more positive.

“It’s to get them to realize their mistakes, and get them to want change their lives. However, sometimes that does not happen,” Randall said.

Kathy Griffin-Grinan is the founder of We’ve Been There Done That, a nonprofit organization that works with Houston-area prisons to help men and women who have been arrested for prostitution and sex trafficking rebuild their lives since 2005. A former prostitute and drug addict herself, she said providing resources to aid in rehabilitation is the only solution.

Since turning her own life around as one of the first members of the Harris County Success Through Addiction Recovery — referred to as STAR — drug program, she is passionate about providing We’ve Been There Done That participants with addiction recovery services, recovery coaching, substance abuse treatment, mental health services and, above all, reminding the women there is still greatness inside them.

“I often say we were the guinea pigs, but STAR is the first (program) where I wasn’t treated as a number. I was treated as a person,” she said.

Griffin-Grinan said her program is non-judgmental. She is not alone in her mission.

We’ve Been There Done That has worked with countless Houston leaders and influential agencies such as Senator John Whitmire, Congresswomen Sheila Jackson Lee and Dr. Alma Allen; Council members Peter Brown and Adrian Garcia; Sheriff Ron Hickman; the Harris County Jail System and the Texas Department of Corrections, among many others.

Griffin-Grinan is also a peer-recovery coach with Santa Maria Hostel, an addiction recovery and treatment center in Houston.

“Bissonnet is the most popularized area in Houston right now, but there are many spots: along FM 1960, along Crosstimbers, Airline, Telephone Road in the Golfgate area,” Griffin-Grinan said. “All of these areas are bad, bad places — invisible, but in plain sight. And it’s not just shady little motels. It’s even higher-end hotels where prostitution takes place. Prostitutes no longer come from low-income neighborhoods. Anyone can became trapped in the sex industry.”

And with prostitution more dangerous now than it has ever been before, Griffin-Grinan said she’s amazed at how glamorized the practice has become in the eyes of today’s young people.

Human trafficking is more than selling your body in exchange for money, some perform sexual acts for favors or even just for a cigarette, she said. But what holds true for most of these women is a false sense of financial security and safety.

She admits not all pimps are physically abusive, but said their women are still being exploited, which makes them all victims. Griffin-Grinan asked to be showed a pimp who would volunteer to go out and risk being raped, sodomized or performing the demeaning oral request while his women collect all the money. He isn’t out there, she said.

Detailing the life of a prostitute, Griffin-Grinan said drug and alcohol abuse always comes into play at some point or another. More threatening than self-medicating to handle the emotional weight of having sex with several — in some situations as many as 15 to 20 clients in one day — is developing an addiction to the lifestyle.

Then there are arguments about choice: should these consenting adults have the choice to sell their bodies? Whether the woman is of adult age or not, Griffin-Grinan said the ‘consent’ is not as straight and simple as that.

“These women are actually adult children, and their youth was stolen away from them,” she said. “And these women don’t actually profit from it.”

Griffin-Grinan said the Houston Police Department has done an exceptional job of educating itself on the situation and is doing the best it can with the resources available. While some are seeking a more aggressive approach, she said hitting the streets isn’t always the best solution.

“There are a lot of churches and other organizations that want help, so they’re going out and giving the girls food and hygiene products and other things without educating themselves on the situation,” she said.

In a lot of cases, when some pimps see the women taking donations, it causes more problems, she said.

“A lot of time that food is being knocked right out of their hands, and they’re forced to eat it off the ground,” Griffin-Grinan said. “They’re trying to pull their girls away from them.”

The solution to Houston’s sex trafficking problem isn’t going to be cut and dry, but great strides will continue to be made as the community works together to rehabilitate these women, she said. It’s also crucial we never stop trying.

“As long as I’m living, I’m going to do whatever I can to bring somebody out,” Griffin-Grinan said.

NewsFix reached out to the Houston Police Department to see how they are handling the situation. They say they have officers out working in the area, but could not comment on the progress.

Will it end? Will the women find help? How can we make it all go away?

Sadly, no one knows, but many care. For now, women like Randall and Griffin-Grinan will continue to comb the streets trying to help women like Nita.

Here are more shocking statistics regarding prostitution and human trafficking for Texas, according to concernedwomen.org.

“Recently the I-10 corridor between El Paso and Houston was identified as the main human trafficking route, and Houston is recognized as one of the main hubs and destinations for traffickers. (Childrenatrisk.org)
“The I-10 corridor is a hotspot for transportation of trafficking victims.”
“Houston is well known as a set up for ‘training brothels’”
25% of all human trafficking victims are in Texas (U.S. Department of Health and Human Services.)
30% of all human trafficking tips to the National Rescue Hotline came from Texas (Polaris Project)
Texas and the Southwest border continue to serve as the biggest point of illegal entry into the U.S., largely because traffickers are able to get people across without documents.