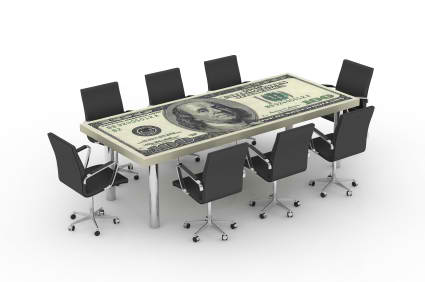 You can NOT come to the table empty-handed — even if you’re not going to eat!

Oh, the debate rages on when it comes to who is the giver and who is the taker in relationships.  More and more women these days complain that men are lazy, shiftless leeches; while the men say some women are gold diggers looking for a “Captain Save ‘Em.”

Well, I recently jumped back into the dating arena and I must tell you, I have been getting the Smack Down!

True Thunder Dome:  two people enter the ring and one comes out as the victor while the other is left a bloody, bruised, broken mess.

In my last “relationship” I was taking my honey out for his birthday, so of course, I was paying.  But during the course of the meal he told me something that left me speechless.  He said I reminded him of a man.

I almost choked, thinking ‘please, do you see the curves on this body?’

Then he further explained and the basis of our relationship became clear and I knew it was time to abort the mission.  I was in a losing battle.

“Well, every time I meet a woman, they see I have a job and a place to stay and immediately start looking for a way to get in,” he said.  “But you have your own.  You don’t need a man for nothing.  You just want to be loved.”

He was right and wrong.  I didn’t need a man financially and was looking for love (which he was not ready to give) but I still wanted to be treated like a lady (which he did not do).

I am almost ashamed to say it — but I’ve got to keep it real — I found myself going in my purse when we were out more than he went in his pockets!  What started out as an innocent courtesy from me, turned into an “expected norm” from him.

One day we were listening to the Ne-Yo featuring Jaime Foxx and Fabolous remix, “She Got Her Own,” and I turned to him and playfully said, “Oh, that’s what you like?”

He quickly turned to me and said, “Yeah, cause I don’t have it!”

Well, I guess I have nothing more to say.

But him “not having it” was nothing but a load of bull.  He was not suffering for anything, just selfish and wanting to save what he had at my expense.  Or frankly, may not have thought I was worth sharing anything with.  Don’t worry, I know the L’Oreal “Because you’re worth it” slogan does apply to me too, but sometimes you have to face the fact that others don’t see you the same and move on.

This was a new experience for me.  I had NEVER paid more than the man.  But as someone pointed out to me, before my marriage I was on the lower threshold economically and no one expected me to have anything.  I graduated from college and began my career during my marriage, so now post-divorce—my dating economic profile is much different.  I have something to bring to the table, and there are men who don’t mind enjoying the fruits of my labor.

“The more success you get, it brings on a power struggle,” said Jerris Thompson, an HR manager.

“At this point there are more women with degrees and higher education than before, and finding the perfect match to complete their ideals of the white picket fence is not always easily met.  So the question now becomes do you want someone with less than you?  The higher up you go, the slimmer the pickins,” Thompson said.

That trend has been on the rise for the last 20 years.  Women are skyrocketing to the top of the corporate ladder and sometimes make more than their partners.

But over the last two decades, this very reason may have led to the new breed of men we see today.  These men are the inspiration for the countless Terry McMillan novels and female empowerment movies.  Remember Wesley Snipes’ down on his luck and full of excuses character in “Disappearing Acts” and the powerful, yet relationship-challenged women in “Waiting to Exhale?”

Some women often complain of getting the short end of the stick, but the lion’s share of the bill.

“Let me tell you how bad it can really be.  This man I once dated would go to events with my kids and I, but never pulled out a dime.  It is embarrassing that I tolerated it, but it was even more embarrassing that he allowed it to continue.  We are to blame for how they treat us,” said Leslie Hall, realtor and entrepreneur. “I come across this all day, every day.  A lot of times it is the men’s perception of me.  They think I have more, and because they think that, they start to hold out on their end.”

Hall says that type of behavior is not acceptable in any relationship or friendship.  Even when a person is invited into someone’s home, they should never come empty-handed or should at least extend the invitation to offer help.  Hall is an ambitious, accomplished woman who makes no apology for her business successes, but is somewhat disappointed in her relationship setbacks.

But some men echo the same concerns.  Many feel trapped by the “bread winner” stigma and say they, too, are trying to protect themselves from being used.

Jackson is a computer programmer in Texas and holds several degrees: A Bachelor in Engineering, a Bachelor in Psychology and a Master in Clinical Psychology.

Jackson says men and women should be cautious when choosing partners.

“You have to be very careful of who is coming to you.  Some people who have not invested in their own futures, are looking to board a ship that is already sailing,” he said.

Jackson further explained that it is not always the inability to contribute, but the willingness.

“A lot of women my age have taken care of men at some point in their past and are looking for something different.  Many have begun to hit their maximum earning potential and after breaking through that corporate glass ceiling, they are looking for someone who can finally give back to them,” he said.  “My point is just as I have something to offer, you will do the same.”

People like Hall and Jackson are what some would consider to be successful, career-oriented people, but they’ve each suffered at one point in time from choosing people that don’t fit into our game plan.

Hall says now she downplays her work and her success as much as she can, so men don’t look at her as a cash cow.

Jackson says while he would never disrespect any woman with derogatory terms, he does stay away from the ones others have given a new name:  B.A.B.S.  (Broke A** B******)

Jackson urges us to be mindful of the fact that the bill has got to be paid. If the other person picked up the tab the last three times, you should pick it up at least once.

Jackson said a man today cannot solely depend on his company being there forever, so he cannot offload his money all “Willy Nilly.”  A person has to find someone that will have their back and work with you.

I remember in my early 20s, I had a crush on a guy that I knew I wasn’t ready for.  My friends – who were so eager to break my dating “dry spell”–tried hooking us up and told me how cute we would be together.  He wasn’t interested in me then and let me know in a polite, but serious way that I understood.

“You girls need to stop all this playing around and running wild.  You need to get yourself together before you can get into anything serious,” he said.

I knew what he meant and was a little disappointed– but not offended –because I knew he was right.  And I took his advice with me through college and continuing today.  I have not seen him in almost 10 years, but I heard he is just as fine and accomplished as he was back then.

When I do run into him again, my words will simply be “thank you,” because his simple suggestion was one of the driving forces about me making sure I could “bring something to the table.”

We are all looking for that special someone we can build with.  Instead of a person subtracting from us, we want someone who can add to our lives.

The Lip Service N.W.A. lesson for the day is —  In this dog eat dog world, bring more to the table than your appetite!

Always inspired, watch “She Got Her Own,” by Ne-Yo, featuring Jamie Fox and Fabolous