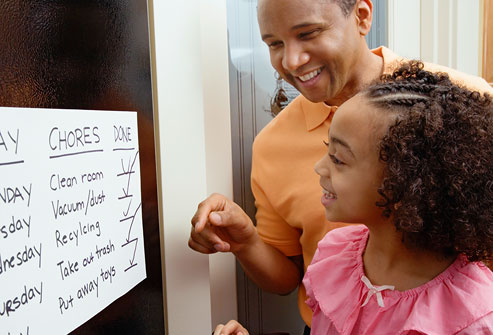 A female friend of mine told me she was tired one day and told her 6-year-old son to fix lunch for him and his 4-year-old sister.  She said she was horrified when he asked her to help him open the package of cheese.

Sounds like a simple task, right?  But how would he know how to do it if he never did it before?

My friend is a single mother and a corporate professional and she does a great job caring for her kids, but some of her methods take the “doting” mother syndrome across the line.

She went into a panic when she realized she may have been hurting her kids, more than helping them.

Not only does she allow her children to sleep in the bed with her, but also does every “little” thing for them.

She caters to them in every aspect of their lives, including making their lunches and pouring their juice.

She explained she did it because it was easier and she would have “less of a mess” to clean later, but I explained what she was really doing was keeping a clean house, but setting her children up for failure.

As for the sleeping in her bed, the kids have their own immaculately set up rooms—but since their sleeping quarters are on a different floor of the home from their mother’s —  she thinks it is safer for them all to be together at night.

While I disagree, she explained she was in a terrifying house fire as a child, and is almost paralyzed with the fear of not being able to reach her kids in case of one.  I explained I understood her apprehension, but told her it is best to teach them survival methods now than relying on them to be rescued later.

I further explained to her that the basic purpose of raising children is to make them responsible and independent adults.

Many parents give absolutely no thought to what their ultimate goal is as it relates to raising their children.

While all of this activity is taking place you have to be cognizant of what your highest and foremost goal is as a parent.  Again, that goal is to make responsible independent adults out of your children.

Your home is your children’s factory.  That factory should be working day and night on producing great human beings for society.  The process is long and arduous, but it is achievable.

Look at your children as if they are little lumps of clay ready to be molded into anything that you want.

Remember as a kid how fresh Play-Doh felt in your hand?  You would squeeze the Play-Doh and you could feel the cool moist clay surging between your fingers.

It was easy to shape and form into anything your imagination could think of.

But what happened as the Play-Doh got older, or you neglected to store it back in its can with the lid securely fastened?  The Play-Doh would get dry and crumbly; it would be almost impossible to mold and form into shapes.

When they are young, children are the same way—like little clumps of moist Play-Doh.  You can easily mold them into whatever you desire as long as you start on them early and work with them daily.

Children want and need to be useful.  Parents must give their children tasks to do daily, or as my mother used to say, “daily chores.”

When the task has been performed on time, and to satisfaction, the parent should then — and only then — reward the child.

That sets the right expectation level early in life for your children.

The reward could be something as simple as going outside to play or a few “extra” minutes to watch television or play their favorite video game.

From the time my daughter was 3 years old, she had small responsibilities she was expected to perform daily and she was always eager to help her mother and I do something.

She wanted to do everything; as do most children.  We encouraged that attitude by always allowing her to participate in all age-appropriate aspects of managing our home.

When we would arrive home from grocery shopping, our daughter knew that her job was to get the gallon of milk out of the car and take it into the house.

The reason we gave her that task was because it would take her about five minutes to get the milk upstairs to our apartment and into the kitchen.

While she was busy doing that, I would have time to get all the other bags out of the car without her being in my way.  When she managed to get the milk into the kitchen she would feel such a high level of accomplishment.  She would be beaming with pride and I would encourage that feeling by giving her a “Hi-Five” or pick her up and shower her with kisses as appreciation for doing such a good job.

Providing your child with a certain level of independence at an early age is the key to helping them become problem solvers.  It makes them understand that good work or effort will be rewarded; and adopting a good work effort will ultimately make them independent of you!

By following this policy early and often you have a better chance at preventing your 35-year-old unemployed child from living at home with you.

Allow your children to participate in all work around the house.  Encourage them to help, and let them make messes and mistakes.

It is much easier for a parent to help their children get back on track when they are young; rather than trying to get them out of a jam when they are grown enough to “know better.”

The first lesson a child is taught is how to hold his or her own bottle, then how to walk and speak, use the potty, then on their ABC’s and 123’s.

The point is, while you are teaching all of these important life lessons, do not exclude or downplay lessons that encourage independence.

Do it early and do it often, and your child will grow up in the way that he or she has been trained.