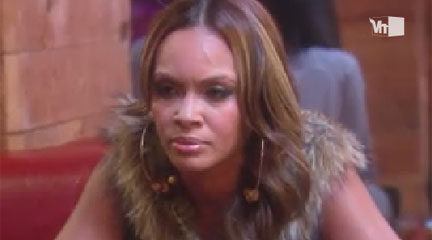 The face of an angel, the tongue of a drunken sailor and the anger of pit bull on steroids – Evelyn Lozado gets right back into the boxing ring – or dinner table – for the latest season of Basketball Wives Miami – or more like, New York.

The Puerto Rican diva has already started going in on ex-bestie Jennifer Williams over things Jennifer said about Evelyn’s fiance’, Chad Ochocinco LAST SEASON!  Whatever happened to the past is the past?

But is it really necessary to rehash an old feud for the sake of VH1 ratings?  I mean, producers please.  You have taken women who clearly 1.  Don’t like each other or 2.  Don’t know each other and keep FORCING them to “partake in a meal” or a couple of cocktails while the cameras roll so they can talk about last year’s mess.  I mean, these women — who obviously HAVE NOT spent any time together since the last show — have nothing to talk about.

Evelyn and Jennifer fell out last season after Jennifer hinted at her disapproval of Evelyn and Ochocinco’s relationship. Jen also blogged that she doesn’t “mess around with the same type of guys that Evelyn dates.”  Since then, it has been a bunch of back and forth — from Rome to the United States — from Twitter to the radio interviews — and God knows what else about the “don’t you say nothing bad about my man,” drama.  Last night, they hashed it — or rehashed it — again about the beef.  Ev says she was pissed over Jen’s blog, which was written in July 2011.  Jen says she did not do it; her publicist did..and yada – yada – yada..Ev threatened to “punch her in her motherf****** face.”  Click here to read  the blog surrounding the new/ old controversy.

Then you enter two more “unsuspecting” — but should know better if they watched the other seasons — women into the mix and let them get dragged into the drama. Suzie gets offended because her trashy sex talk was deemed inappropriate and Jennifer – who clearly told the “new girlz” she doesn’t warm up to new people gets mad because someone called her bougie.  OOOOOOKKKKKK.  Royce’s role, we still don’t know yet.

Tami “Keep it Real” Roman totally allowed Suzie and Jennifer to think the new girls talked bad about them, but acted like she defended them in a roundabout way. What the hell? The producers should be blamed for this manufactured load of you-know-what. I would NEVER say anything bad about another sistah, but I am really disappointed in what the show has been reduced to.

And another thing…The clips of ALL the upcoming FIGHTS that Evelyn is about to have..makes her appear to need a good psychiatrist..or one day she might get a good a** whooping from somebody who does not care about losing a few weave tracks.

The “Mean Girl” syndrome should not be a standard practice from WOMEN who left high school a few decades ago!

But on another note….we saw some great fashions last night…That’s a compliment, right?  And yes, we will continue to watch, so KUDOS VH1 – it’s like a bad train wreck you just can’t take your eyes off of!

Watch a clip of the blowup between Evelyn and Jennifer, courtesy of VH1.com.