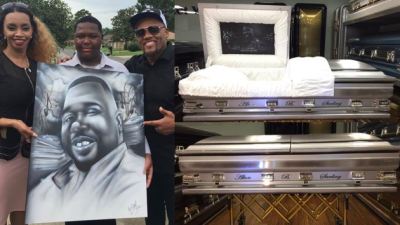 HOUSTON — Don’t call him the “Casket Man,” just call him “Thee Almighty BP!” And he has been making sure people across the country have been laid to rest in grand fashion.

Barron “BP” Preston is the CEO of Casket World USA, which he opened with his wife, Leslie Preston, less than two years ago in northeast Houston.

In that short time, he has been called upon to design the final resting beds for many people in the community, and has gained national attention for providing services in many (unfortunate) high-profile cases.

Why do they call him? Because his caskets are considered a work of art, and Preston takes his craft very seriously. Not only does he want to make sure everyone is laid to rest as a queen or king, he wants to make sure they are reflected in ways their loved ones remember most.

“I consult with a family and take notes, and I get information about the deceased. I put all of that in my head, and I come up with a vision that spiritually fits that person. I take a moment to meditate and then I get busy sketching out what I think represents that person,” he said.

Preston then presents his vision to the family, and they make adjustments where necessary.

Sometimes the end result is classic and simple, and other times it is “off the chain,” as they say.

Caskets sold by Preston have included everything from extravagant floral arrangements, intricate artistry and designs, to custom slab wheels and candy paint  in a “pimp my casket” type of way.

Most recently, he custom designed the casket for Alton Sterling, who was shot and killed by Baton Rouge police. He said he knew because of the sensitivity surrounding Sterling’s death, the casket had to have a powerful meaning.

“The family allowed me to do what I wanted to do. I chose platinum and stainless steel brush for the casket to represent strength, and since he loved music and his city, I decorated the head panel with CDs and the skyline of Baton Rouge. I added musical notes because he was affectionately known as the CD Man,” Preston said. “It’s all about healing and pride, and that is what his family needed at that time and I wanted to deliver.”

He did, and what’s more impressive, he did not charge the family. The signature casket was not only hailed by the media and funeral attendees, but went viral on social media.

Locally, Preston was also called upon to design the casket for many notables, including H-Town legend MC Wickett Crickett, the brother of Slim Thug, and the brother of State Rep. Senfronia Thompson.

He also designed the casket for a high profile murder victim, Shante Thompson, a transgender woman who was killed in the Montrose area.

“When I realized she was a part of the LGBT community, and was going to have a closed casket due to the nature of her death, I wanted to have the outside make a statement so I made her what I called an “Angel on a Rainbow.”

For Thompson, he flew in fresh roses from Ecuador for the full spray which was placed atop her casket.

“I never thought in many of my years that i would actually be in the casket business. But I am and for some reason I feel like spiritually I was cast down to be exactly where I’m at, helping people.  That’s something I’ve always done anyway,” Preston said.

Preston says his prices are affordable for everyone.

“People don’t realize that coming directly to me, and bypassing the funeral home, is the way to save on a casket,” he said. “I have the best products, the best prices and really work hard to capture the essence of your loved one. When you purchase with Casket World USA, the personalization signature of the deceased person’s name on the casket is always free.”